Rusty Hogan in Missouri is making semi PPShs. Barrel is completely enclosed in his barrel shroud. PPSh enthusiast, JP, sent me this picture of his Hogan-semi alongside a full auto PPSh.

Rusty said he will send me more pictures and info on his conversion. I will post them as soon as I get them. (Never got any.)
His phone is: 314-271-8465. Best time is late afternoon or early evening. I have been told by numerous people that they had problems contacting him. Update Nov. 30, 2000: Finally got my hands on one of Rusty's semi conversions. The workmanship on the barrel shroud is excellent. Wish I could say the same for the modification to the trigger and semi-trip sears. This gun was given to me to fix several malfunction problems; ie., firing as a round is being chambered and firing twice with one trigger pull. After much reworking of the firing pin, bolt and trigger assembly, I believe the weapon now functions as it should. I need to do more testing to be sure it functions 100%. Shooting this weapon, I experience a rather unpleasant "jolt" that I don't get with a full auto PPSh. I believe it could be caused by the increased overall length of the bolt and "striker" together, causing the buffer to be hit sooner, and with more force, than with just the bolt itself. Or maybe, it is possible, with the bolt being already at rest, that there is more force being exerted on the bolt rearward than with the "open bolt" SMG. This is something on which I need to do more research.

Inter Ordnance is also making semi-auto PPShs. I have spoken with them several times requesting pictures and a test weapon. To date, have not received any further info (as of 08-13-01). They have been advertising in Shotgun News.

Regular PPSh magazines and drums can be used in this semi. Barrel is fixed and cannot be removed. An smooth bore tube, welded onto the barrel, extends out past the shroud. Price has dropped to $599.00; for 2 or more rifles- $549.00 (Feb. 14, 2000 Shotgun News)- Original price of $949.95 was dropped to $799.95, which was still steep in my opinion considering there appeared to be problems with this weapon and the manufacturer. Current price looks better, only if the past problems have been corrected. I just got an e-mail (02-21-00) from an individual who ordered one Dec. 6th, 1999, and is still waiting for it. I'll update this page as soon as I hear anything, good or bad. 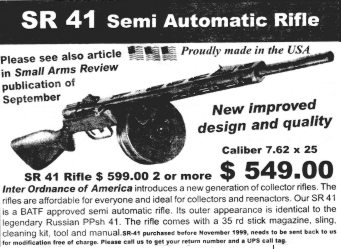 Whether the early problems still exist, I don't know. Supposed to be a "new and improved design". They say in the ad that rifles bought before Nov. 99 should be sent back to them for a free modification.
I added the new Shotgun News ad for InterOrd. (see above right) Besides a 9mm SR-41 now available, the price has increased $200! A two month delivery time. The 9mm version is $999.95. Still too much in my humble opinion. I'm not impressed with the functioning of these semis yet.

Posted by Chris on October 05, 1999 Tom Bowers Message Board:

"Sorry, but I have to vent. I bought a total of 5 of these semi auto PPShs in July. All but one have had to be returned to Inter Ordnance by either myself or my customers. They all suffered from malfunctions of the bolts, firing pins and/or trigger groups. I had an accidental discharge with the first one I shot. I locked a mag in place to try it out, released the bolt and Blam! Luckily I was pointing down range. After that shot the hammer would no longer stay cocked. I called Inter Ordnance and spoke to the boss, Uli, personally. He said that this was unusual and for me to send it back marked to his attention and he would have a replacement gun to me before my next show a week later. I called after a month and Uli told me that it was surely on its way to me. That was also weeks ago. I just now got off the phone with them. I was told that all the SR-41s had been sent back to the manufacturer and it was impossible to tell me when I might expect my gun to be returned to me. I asked to speak to Uli again and was informed that he "is in Germany". I asked to speak to the guy they named as being in charge of the SR-41s and was told that he could not speak to me as he was unloading a truck. It sure feels like the old stall 'em, feed 'em some BS and get 'em of your back routine. I can sympathize with someone who has been stuck with a bunch of dog merchandise. What makes me so frustrated and angry is the way they are handling it. I do not think it is good customer service to tell someone their gun was on the way when it is not or that the company management feel that unloading a truck is more important than speaking to worried customer. My customers and I are now in the unpleasant position of having significant sums of money tied up for an indefinite period of time by a company whose word cannot be trusted. Thanks for listening."

-Chris notified me InterOrd has contacted him 10-06-99, were very apologetic and said the warehouse mgr. was going to get him another rifle. Chris said he would let me know what happened. -bill berg-

UPDATE-10-28-99! Chris has said he still is having problems with InterOrdnance. He does not recommend doing business with these people. I have bought some Chinese PPSh mags from them with no problems, but with what has happened to Chris, I would be hesitant to deal with them in the future.

First off neither I, nor any of my customers, have yet to receive their SR-41 back from Interordnance. I was again led to believe by Interordnance that a replacement gun was on it's way when it was not. This only added to my anger and strengthened my low opinion of Interordnance. I was ready to call them again when I received a call from Dirk Lindenbeck of A A Arms, the SR-41's manufacturer, this afternoon that explains a lot. It seems he has had to step in and carry the customer service "ball" that Interordnance has "dropped". It turns out that AA Arms has recalled ALL the rifles they have mfg so the people at Interordnance telling me my gun was on it's way were way off base. Mr Lindenbeck enumerated the problems that have been experienced with their guns and said that AA Arms had determined their cause and is working on a fixes for them all. The two biggest problems have been the nature of the construction of the PPSh-41 subguns they started with and the fact that they used a lightly loaded Chinese 7.62X25 round in their versions' development. The Original parts Soviet parts kits have to be kept together. Like a lot of other Soviet wartime stuff the parts of these PPSh kits are virtually handfit making parts interchangeability problematic. This makes for difficulty when trying to remanufacture the kits on a large scale. Mr Lindenbeck went on to say that the more heavily loaded 7.62X25 ammo available now is the other major cause of the SR-41 multiple malfunctions. He says they are working on reliability now and that when that is improved, he will start sending the guns out again. Can't say when though. At least AA Arms is being up front.