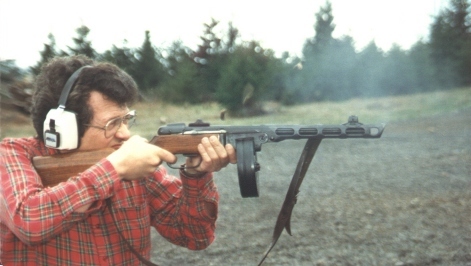 History of the PPSh-41

Two national catastrophes contributed to the Soviet enthusiasm for submachine guns. The first was the Winter War with Finland in 1939-1940 when the Finns used submachine guns with devastating effect during close combat in the forests, and the second was the German invasion of 1941 when the Russians lost in the retreats both huge quantities of small arms and much of their engineering capability.

There then arose an urgent demand for a light and simple weapon capable of a high volume of fire, and the answer to this was the PPSh-41, designed by Georgii Shpagin. It was much cheaper and quicker to make than the preceeding models and was finished roughly; the barrel was still chromed, however, and there was never any doubt about the weapon's effectiveness. Stripping was simplicity itself, as the receiver hinged open to reveal the bolt and spring. There was no selector lever on some of the late models, when the gun was capable of only automatic fire, and the magazine was the proved and tried 71 round Suomi drum. The rate of fire was high, but a rudimentary compensator helped to steady the climb of the muzzle. About 5 million PPSh guns had been made by 1945, and the Soviets adapted their infantry tactics to take full advantage of such huge numbers: often complete units were armed with nothing else. In Russia, the PPSh went out of service in the late 1950s, but it has been supplied in enormous quantities to the satellite and pre-Communist countries, so that it will still be seen for many years. It has been made in various Communist countries, and in Iran, there are a multitude of variants. At one time, the German Army converted a few captured guns to 9mm by changing the barrel and magazine housing.
this is just to take space